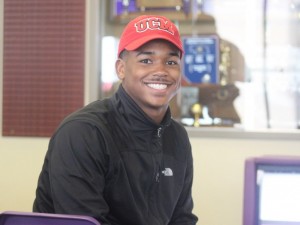 Jordan Flowers, senior quarterback this season for the Omaha Central Eagles, has been selected to play in the Nebraska Shrine Bowl on June 3rd.

The game will take place on the University of Nebraska-Kearney campus. This is the 59th Shrine Bowl in history, a game that was formed in 1958 so that graduating high school seniors could participate in an all-star game.

Flowers will participate as a member of the South team, along with some of his future teammates. You may remember that on February 1st, Flowers signed with the University of Central Missouri along with five other recruits from Nebraska. Shae Wyatt will not only be Flowers’ wide receiver during the Shrine Bowl, but for the next four years as Mules. On the North team in the Shrine Bowl, Flowers will play against fellow UCM signee Sylvo Johnson from Bellevue West.

Jordan was chosen because of his athletic excellence on the field and because of his academic excellence and quality of character. Flowers is a multi-sport athlete, participating in football, basketball and track. During his four years at Central, he threw for 2,710 yards and accumulated 35 total touchdowns. He has been a major factor in the winning ways of varsity basketball and won a state championship in the 4×100 meter relay.

His future UCM football coach Jim Svoboda in an interview with nebhssports.com said “Jordan possesses all of the critical aspects we look for in playing the most important and difficult position on the field. Leadership, toughness, confidence, playmaking ability and a great passion to lead his team to victory.”

Eagle Nation wishes Jordan Flowers all the best as he continues his academic and football career! To learn more information about the Nebraska Shrine Bowl and how you can watch Flowers take the field one more time in his high school career, go to neshrinebowl.org.

No Events This Week

Events are added by athletic staff.
View All Events